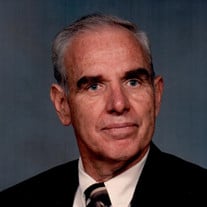 Rodney Thayer Chambers, 84, was born on October 22, 1936, and left his earthly home on March 29, 2021. He was a proud, lifelong resident of Magnolia, Arkansas. He was born to Melvin and Myrtle (Click) Chambers. After graduation in 1954, from Magnolia High School, Rodney attended Southern State University (SAU) and University of Arkansas where he graduated from law school in 1961. He returned to Magnolia to begin his law practice, Chambers & Chambers, with his father. He married Carolyn Rowe in September of 1965, and said it was the best decision he ever made. They had one child, Rhonda Gail, in August of 1970. Though his initial disappointment in having a girl was something his family never let him live down, no father could have enjoyed being a “Girl Dad” more. Rodney served as City Attorney for 20 years then as District Judge for 22 years. In his years of elected service, he never faced opposition in any election. Though he only had one child, he believed in treating those who needed guidance as bonus children. He was always willing to listen and provide advice, requested or not, to those he contacted. He was a believer in forgiveness and redemption. He also believed that it was in everyone’s nature to do right. Some just needed to be shown someone cared and to actually believe and accept it. After retiring from his practice and the bench, he pursued his true calling in life which was serving others. He found joy serving as a CASA advocate, transportation volunteer taking those who could not drive to appointments throughout the state, visiting those in the hospital or homebound, and filling any other need he saw. He looked forward each year to helping plan the M.H.S. reunion for 50+ classes and reconnecting with all of his 1954 classmates. Rodney never met a stranger and tried to make a personal connection to everyone. His love of others was possibly exceeded only by his love of sports. Rodney loved the Magnolia Panthers, SAU Muleriders, Arkansas Razorbacks, and any team on which his grandchildren or family played. He also loved fishing on Lake Erling and deer hunting. He spent more time preparing to hunt than he spent actually hunting. He also loved quail hunting with his brother-in-law, Allen. Regardless of what may have been going on at his house, at 2:30, time stopped for him to go to his daily coffee. This started over 40 years ago at the Magnolia Court House and never stopped. Though the location may have changed several times through retirement, McDonalds remodeling, then Covid, the close friendships he developed over a cup of coffee did not. Rodney is survived by his wife of 55 years, Carolyn Rowe Chambers; daughter, Gail DeLee (Dennis); grandchildren, Ty DeLee, Grace DeLee Ernst (Jordan), and Dylan DeLee; sister, Anita Prince (Dale); and many cousins, nieces, and nephews. He was preceded in death by his parents, Melvin Thayer and Myrtle Chambers. A public visitation will be at Lewis Funeral Home on Wednesday, March 31st, from 4-7. A memorial service will be at First Baptist Church, Magnolia, Arkansas, on Thursday, April 1st, at 2:00 PM In lieu of flowers, donations can be made to the charity of your choice or one of Rodney’s favorite charities. M.H.S. 50+ Scholarship in care of SAU Foundation, 100 E. University, MSC9174, Magnolia, AR 71753, Asbury UMC Food Pantry (Body and Soul Cupboard), 1300 E. University St., Magnolia, AR 71753, Denham Springs Elementary Playground fund, where his daughter is principal, 713 Hatchell Lane, Denham Springs, Louisiana 70726 or online donations at www.denhamspringselem.org (Playground Fundraising Campaign link), Friends of Lake Erling, P.O. Box 567, Taylor, AR 71861. Special thanks to the emergency responders who worked his accident and to UAMS for providing excellent medical care and emotional support. If you choose to attend an event in person, please wear a mask. This is especially important to the family.

Rodney Thayer Chambers, 84, was born on October 22, 1936, and left his earthly home on March 29, 2021. He was a proud, lifelong resident of Magnolia, Arkansas. He was born to Melvin and Myrtle (Click) Chambers. After graduation in 1954,... View Obituary & Service Information

The family of Rodney Thayer Chambers created this Life Tributes page to make it easy to share your memories.

Send flowers to the Chambers family.