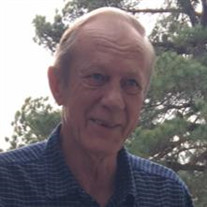 Ronnie C. Hicks, 72 of Willisville, Arkansas passed away Thursday, October 21, 2021, at Baptist Medical Center in Little Rock, Arkansas. He was born, May 1, 1949, in Prescott, Arkansas to the late Adron C. Hicks and Maxine (White) Hicks Firm. He proudly served his country from 1968 to 1972 in the United States Army serving during the Vietnam War. He retired from Arkla-Gas Company and later retired as a truck driver for Frank Thompson Transport. Ronnie is survived by his wife of 53 years Vicky Hicks of Willisville; three children, Randy Hicks and wife Susan of Murfreesboro, Jennifer Garner and husband Matt of Bismarck, Shannon Hicks and wife Crissi of Texarkana; seven grandchildren, Emily and Blake Baccaam of Alexander, Ashley and Jedd Lambert of Bismarck, Ross Whitley of Bismarck, Peyton Hicks and Gracen Hicks of Texarkana, Montana Garner and Houston Garner of Bismarck; a brother Bo Hicks and wife Laurie of Magnolia; sister in law Toni Hicks of Bella Vista; step mother, Melba Hicks of Marysville; and a host of nieces, nephews, and friends. Ronnie is preceded in death by his parents and a brother Kenny Hicks. Funeral services will be at 2:00 PM on Monday, October 25, 2021, at the Willisville Church of Christ with Cris May officiating. Burial will follow at Willisville Cemetery under the direction of Lewis Funeral Home, Inc. in Magnolia. Visitation with the family will be Sunday evening from 6:00 to 8:00 pm at the funeral home. Pallbearers will be Charles Long, Bobby Walthall, Danny Jarvis, Chris Long, Matthew Herring, and Don Callicott. To sign the online guestbook or share a memory visit www.lewisfuneralhome.biz

The family of Ronnie Hicks created this Life Tributes page to make it easy to share your memories.

Send flowers to the Hicks family.