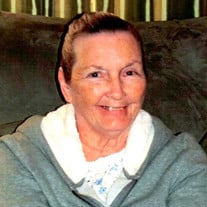 Ruby Bryan, 77 of Magnolia, Arkansas passed away on Saturday, October 13, 2018 at Wentworth Place. She was born on April 17, 1941 in Hope, Arkansas to the late Bill Turnage and Louise Butler. She was a retired stocker at Wal-Mart and a member of the Laughlin United Pentecostal Church. Ruby was a devoted Christian where she lived her life serving God, reading her Bible, and taking care of her family. She loved her kids, grandkids, and great grandkids. She is preceded in death by her father and mother; her husband David Bryan; and a son Randy Baxley. Ruby is survived by her daughter, Judy Braswell and husband Steve of Marysville, Arkansas; two sons, Terry Baxley and wife Renee of Pace City, Arkansas; Mike Baxley and wife Susan of El Dorado, Arkansas; three granddaughters, Jennifer Bridges of El Dorado, Kayce Carter of Marysville, Suzanne Holloway of Stephens; two grandsons, Chris Baxley of Stephens, Vincent Baxley of El Dorado; nine great grandchildren; two sisters, Barbara Kay Fitch of Orange, Texas, Mary Jo Beaird of Alba, Texas; and a host of nieces, nephews, and friends. Funeral services will be held at 10:00 am on Tuesday, October 16, 2018 at Lewis Funeral Home Chapel with Pastors Robert Roncally and Anthony Needham officiating. Burial will follow at New Hope Cemetery under the direction of Lewis Funeral Home, Inc. in Magnolia. Visitation with the family will be Monday evening from 6:00 to 8:00 pm at the funeral home. Pallbearers will be Stevie Millican, Tommy Bailey, Craig Hall, Mike McGee, Chris New, and Tony Lewis. Honorary pallbearers will be James Brown and Dustin Brown. To sign the online guestbook or share a memory visit www.lewisfuneralhome.biz

Ruby Bryan, 77 of Magnolia, Arkansas passed away on Saturday, October 13, 2018 at Wentworth Place. She was born on April 17, 1941 in Hope, Arkansas to the late Bill Turnage and Louise Butler. She was a retired stocker at Wal-Mart... View Obituary & Service Information

The family of Ruby Bryan created this Life Tributes page to make it easy to share your memories.

Ruby Bryan, 77 of Magnolia, Arkansas passed away on Saturday,...

Send flowers to the Bryan family.