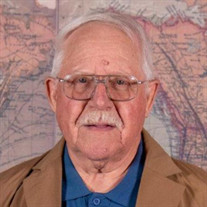 Rudolph John Eichenberger, 80, of Magnolia, Arkansas, passed away Friday, April 8, 2022, at the Wadley Regional Medical Center in Texarkana, Texas. Rudy was born on June 10, 1941, in Pawnee City, Nebraska, to Rudolph and Mildred (Dezort) Eichenberger. He was a lifelong educator. He graduated as Valedictorian of his high school class at Pawnee City High School in 1959. He attended Peru State College in Nebraska, graduating with high honors in 1964. He went on to receive his master’s degree in Science from Emporia State College in Kansas in 1969. He received his Doctor of Physics degree in 1972 from Northern Colorado. He taught at Eureka College until 1981 when he was hired by Southern Arkansas University. He was a well respected, energetic, and brilliant physics professor at SAU. He was also a huge supporter of various departments and programs with the university. Rudy was preceded in death by his parents; his loving wife of 57 years, which he met in 1969 while attending Emporia State College, Sharon (Miller) Eichenberger, and sister in law Lesa Eichenberger. He is survived by his brothers Robert and wife Judy of Talmadge, Nebraska, Arnold of Pawnee City, Nebraska, and Daniel of Burchard, Nebraska, and many nephews, nieces, colleagues, and friends. A visitation will be held on Wednesday, April 13, at 9:00 a.m. at Lewis Funeral Home, Inc. in Magnolia with funeral services to follow at 10:00 a.m. with Bro. Jeremy Langley officiating. A visitation will be held on Friday, April 22 at 9:30 a.m. at the Salem United Church of Christ Church in Steinauer, Nebraska with a graveside following at 10:00 a.m. at the Salem Cemetery under the direction of Wherry Mortuary in Pawnee City, Nebraska.. Honorary pallbearers will be Dr. Dan Dykema, Dr. Del Duke, Dr. Debe Kincaid, Dr. Abdel Bachri, Dr. Trey Berry, Dr. Hasan Shehada, Dr. David Rankin, Josh Kee, Dr. David Ashby, Harry Kolb, and Michael Boyd. In lieu of flowers, memorials may be made to Southern Arkansas University Foundation, PO Box 9174, Magnolia, AR 71754. To sign the online guest book or to share a memory visit www.lewisfuneralhome.biz

The family of Rudolph "Rudy" John Eichenberger created this Life Tributes page to make it easy to share your memories.

Send flowers to the Eichenberger family.