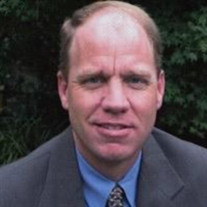 Thomas Wayne Ross of Magnolia, AR passed away on July 14, 2020 at Hospice of Texarkana at the age of 58. Since1990, Wayne has been a partner and co-owner of Horizon Electronics-Radio Shack in Magnolia. Wayne was born July 17, 1961 in Magnolia to the late Delwin and Billie Ross. A lifelong resident of Magnolia, he was a 1979 graduate of Magnolia High School and earned his BBA in 1988 from Southern Arkansas University where he was an All-AIC swimmer for four consecutive years, 1980-1983. In 2009, Wayne was inducted in the SAU Hall of Fame. Wayne set and still holds SAU swimming records for the 50, 100, 200, and 1,000-yard freestyle, the 100 breaststroke, the 200 individual medley, and as a team member of three record setting relay teams. Wayne was coached by his father, Dr. Delwin Ross. Wayne’s contributions helped provide his father with the AIC and NAIA District 17 Coach of the Years honors in 1980. Wayne, or Wayno, as he was affectionately known by children and adults alike who adored him was the ultimate churchman and Christ follower. Wayno was part of the First Baptist Church Magnolia family his entire life. He faithfully served his Lord and his church in the Toddler Sunday School Department with his wife Judy for 32 years, Awana Ministry as game director for 26 years in addition to serving in the Sound/Media Ministry, chairing a Pastoral Search Committee, and active in the Music Ministry, Men’s Ministry, Financial Ministry and Deacon’s Ministry. His love for his church family and his Lord shone through in all his areas of service and he was an example to all. Wayne was preceded in death by His parents, Delwin and Billie Ross. He is survived by his wife of 32 years, Judy Ross; daughters Christie (Tim) Malone of San Antonio,TX and Cindie Inman of Little Rock; grandsons Robby Malone, San Antonio, TX and Nate Nokes, Taylor, AR; Sister Sharon Ware, Magnolia; Brother David (Brenda) Ross, Tulsa; Nieces Kerri (Josh) Packwood, Fayetteville, Melani (Ryan) Dittfurth, Melissa, TX; Uncle Don (Jan) Franks, McNeil; Father in-law Donald Manning, Monette, MO; Sister in-law Carol (Lynn) Nutt, Monette, MO; Nephew Matt Nutt, Jefferson City, MO. Viewing and signing of the guestbook will be available on Thursday, July 16th from 1:00 to 6:00 pm at Lewis Funeral Home, Inc. A graveside service will be held at Memorial Park Cemetery at 10:00 am on Friday, July 17, 2020 with Roger Dunlap officiating. A memorial service will follow at 11:00 am at First Baptist Church with Dustin Wisely and David Watkins officiating. In lieu of flowers, the family respectfully requests memorial contributions to First Baptist Church, PO Box 456, Magnolia, Arkansas 71754 and designated for Missions or the Student Building. Honorary pallbearers will be Paul Bullock, Greg Matthews, Jeff Neill, Scott Rowland, Craig Rogers, Ricky Talley, and Lynn Gates. The family would like to thank each of you who called, messaged, and prayed for our family over the last few months. Due to COVID-19 the family will not be present at the funeral home. You are encouraged to pay your respects at the funeral home or join us as we celebrate Wayne’s life at the Memorial Service. To sign the online guestbook or share a memory visit www.lewisfuneralhome.biz

Thomas Wayne Ross of Magnolia, AR passed away on July 14, 2020 at Hospice of Texarkana at the age of 58. Since1990, Wayne has been a partner and co-owner of Horizon Electronics-Radio Shack in Magnolia. Wayne was born July 17, 1961 in Magnolia... View Obituary & Service Information

The family of Thomas Wayne Ross created this Life Tributes page to make it easy to share your memories.

Send flowers to the Ross family.