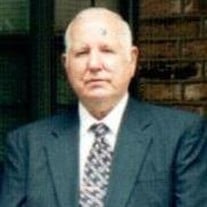 Wendell Stroman, 80, of Magnolia, AR passed away Monday, October 22, 2018 at the Magnolia Regional Medical Center in Magnolia, AR. Wendell was born on September 14, 1938 in Naples, TX to the late Morland Elmer Stroman and Lillie (Lawhon) Davis. He was a member of the First Baptist Church of McNeil, AR and was retired from Southern Arkansas University as the maintenance supervisor. Wendell served his country in the United States Army from 1960 to 1962 and made SPC 5 in eighteen months. He was a member of the Men’s Club at the Alumni Center (Old Bruce Lair) and was one of the founding members of the Brister Deer Club. Wendell was preceded in death by his parents; brother Earl Stroman and sister-in-law Glenda Stroman; brother-in-law Robert Roden; and father and mother-in-law Jack and Lillian Roden. He is survived by his wife of 60 years Janis Stroman of Magnolia, AR; daughter Donna Stroman of Ft. Worth, TX; grandsons, Eddie Jones of Ft. Worth, TX, Michael Crockett of Hot Springs, AR, and David Crockett of Ft. Worth, TX; great grandson Alexander Crockett of Ft. Worth, TX; nephew Barry Stroman and wife Becky and their son Lance of Cocoa, FL; niece Regina Minor and husband Dennis of Magnolia, AR; and brother-in-law and best friends Joseph F. Lewis and wife Jackie of McNeil. AR. Funeral services will be held at 2:00 PM on Saturday, October 27, 2018 at the Lewis Funeral Home Chapel with Dr. Eric Goble and Bill McManus officiating. Burial will follow at the Memorial Park Cemetery under the direction of Lewis Funeral Home, Inc. in Magnolia, AR. Visitation will be held Friday from 6:00 to 8:00 PM at the funeral home. Pallbearers will be Michael Crockett, David Crockett, Eddie Jones, Gary Eddy, Keith Dodson, Dale Roden, and Chad Grouse. Honorary pallbearers will be Joe and Margie Massey, Bennie Dodson, Joe and Jackie Lewis, and the members of the Men’s Dinosaur Club SAU. The family requests memorial contributions to be made to the charity of the donor’s choice. To sign the online guestbook or to leave a special memory, please visit www.lewisfuneralhome.biz.

The family of Wendell Stroman created this Life Tributes page to make it easy to share your memories.

Send flowers to the Stroman family.