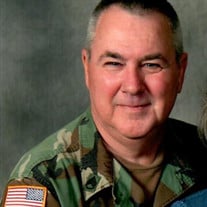 SFC William “Dub” Rayburn Austin, III, 71, of Magnolia, Arkansas passed away Tuesday, February 23, 2021 at the Magnolia Regional Medical Center in Magnolia. Dub was born on November 15, 1949 in Monticello, Arkansas to the late William Rayburn Austin, Jr. and Katie (Berry) Austin and was a member of Central Baptist Church. Dub enlisted in the United States Navy in 1968 and served during the Vietnam War until he was honorably discharged in 1973. Dub then reenlisted in the United States Army National Guard and served 36 years until he retired as Sergeant First Class in 2009. After his retirement he was employed as a building security specialist with Southern Arkansas University. Dub is survived by his wife of 45 years Phyllis Franks Austin, daughter Raegan Austin, son William R. Austin, IV, brothers Wayne Austin and wife Becky and Jerry Austin and wife Charla, all of Magnolia, nieces Stacey Essex and husband Pete of Aubrey, TX, Jennifer Austin and Mandy Barker and husband Kenny, of Magnolia, and a host of extended family and friends. Funeral services will be held on Saturday, February 27, 2021 at 10:00 a.m. at Central Baptist Church with Dr. Mike Seabaugh and Bro. Steve Ford officiating. Burial with military honors will follow at the Magnolia Memorial Park Cemetery under the direction of Lewis Funeral Home, Inc. in Magnolia. Visitation with the family will be Friday, February 26 from 6:00 to 8:00 p.m. at the funeral home. Memorial donations may be made to Central Baptist Church, 207 West Union, Magnolia, AR 71753 or CCAPS, PO Box 2003, Magnolia, AR 71754. To sign the online guest book or to share a memory visit www.lewisfuneralhome.biz

The family of SFC William Rayburn Austin created this Life Tributes page to make it easy to share your memories.

Send flowers to the Austin family.