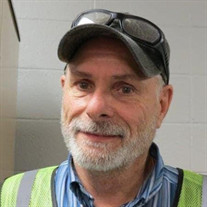 William Samuel “Billy” Davis, 61, of Magnolia, AR died Wednesday, October 14, 2020 at his home. Billy was born August 15, 1959 in Magnolia, AR to Verma Cooke. He married the love of his life Donna Orren, September 15, 1977. He began his career at Howmet, now Hydro 43 years ago. He was looking forward to retirement in December so he could focus on Donna’s honey do list and spend more time hunting and fishing. Some of his favorite times were fishing at Felsenthal with his boys, Jonathan, Will, and Dylan. He loved it best when his favorite daughter, Wendy tagged along. He served as a deacon and Sunday school teacher for the Village Baptist Church. He was a member and served on the Village Volunteer Fire Department. Billy is preceded in death by his mother Verma Cooke, father in law Don Orren, and siblings Donna Smith and Sammy Davis. He is survived by his wife of 43 years Donna, his children Wendy (Jonathan) Love and William Davis (Sheryl McWilliams), and his only grandchild Dylan Burge. He is also survived by his second mother Dorothy Orren, sisters in law Sherry Wilson (David), Kathy Jackson (Tommy), and siblings Harold Aldridge (Lonna) of Belfair, WA, Barbara Sharp (Burnie) of Waldo, Robert Davis (Anna) of Beebe, Randy Davis (Virginia), and Bobby Davis (Brenda) of Sylacauga, AL. Graveside services will be held on Friday, October 16, 2020 at 10:00 a.m. at the Village Cemetery with Bro. Sean Lupton officiating under the direction of Lewis Funeral Home, Inc. in Magnolia. Visitation will be Thursday, October 15 from 5:00 to 7:00 p.m. at the funeral home. Honorary pallbearers will be Terry Smith, Johnny Mooney, Clay Carter, and Russell Thomas. Memorial donations may be made to the Village Baptist Church, 6125 Columbia Rd 36, Magnolia, AR 71753. To sign the online guest book or to share a memory visit www.lewisfuneralhome.biz

The family of William Samuel "Billy" Davis created this Life Tributes page to make it easy to share your memories.

Send flowers to the Davis family.